Fertilizers come from natural ingredients, so it follows that their production requires significant use of natural resources including natural gas, water, and land. TFI’s member companies reuse and reclaim the resources they use – not only does this make economic sense, it also enhances the sustainable production of fertilizer.

As the total number of companies who participate in this report grows, so, too, does the quantity of reported resources used. Trends are best tracked when the presented data is given a common scale. Here data is scaled from many facilities to the amount of resources needed to produce one ton of fertilizer.

Minimizing GHG emissions is a priority for companies in the fertilizer industry. Investment in capital improvements, including upgrades to existing production facilities and the construction of new, more efficient facilities provides opportunities to implement state-of-the-art technologies that reduce GHG emissions.

High purity carbon dioxide (CO2) is a byproduct of ammonia production, but it is also a necessary ingredient in the production of urea fertilizer; therefore, the industry captures CO2 emitted during ammonia production and re-uses it during the urea production process. Excess captured CO2 from fertilizer production is also recycled for other industrial use, such as enhanced oil recovery and the carbonization of soft drinks.

The percentage of GHGs that were captured and not emitted into the atmosphere has increased steadily over the past four years, going from 9 percent in 2013 to 25 percent in 2016.

In 2016, participating companies  reported capturing 8 million metric tons of CO2. This is the equivalent of taking 1,713,062 cars off the road for a single year.

Coffeyville Resources Nitrogen Fertilizers produces an average of 1.4 million tons of carbon dioxide (CO2) annually at its Coffeyville, Kan., fertilizer plant. In 2013, a newly constructed compression station allowed the plant to begin capturing nearly all of the excess CO2 and prevent it from being released to the atmosphere.

The fertilizer plant sells its excess CO2 — more than 600,000 tons per year — to a nearby oil producer, which uses the gas to enhance its crude oil production. Coffeyville Resources Refining & Marketing then buys a portion of the producer’s crude oil to help supply its refining operations.

Similar to the fertilizer plant, the refinery also creates a byproduct, petroleum coke, as a result of its manufacturing process. Petroleum coke is traditionally used as a fuel in boilers and furnaces, similar to coal. Yet, petroleum coke is comprised of more than 90 percent carbon and has higher energy content than coal.

Percentage of GHG emissions that were captured (not emitted)

Sustainable water use is a key element in the industry’s conservation efforts. Water is a significant resource in the production of phosphate and potash fertilizers, and to a lesser extent for nitrogen. TFI gathered water-related data based on volume (in gallons) of water purchased and water withdrawn from wells and surface water.

Many fertilizer manufacturers have set water efficiency and zero discharge goals for their operations. In 2016, member companies reported they operated a total of 81 zero-discharge facilities. A zero-discharge facility is defined as having no direct liquid discharge to surface or ground water, other than stormwater drainage. These facilities are beneficial because they avoid adding any pollution load to waterways or local municipalities.

These goals include the use of recycled and reclaimed water. Recycled water generally refers to treated domestic wastewater that is used more than once before it passes back into the water cycle. Reclaimed water is not reused or recycled until it is put to a purpose.

Members also reported recycling 461.9 billion gallons of water within their operations in 2016.

Among nitrogen producers, water usage on a per-ton basis has decreased each year since reporting began in 2013. The amount of water used to produce one ton of nitrogen fertilizer is down 16 percent from 2015 to 2016 and down 38 percent since 2013.

Water use on a per-ton basis is declining for phosphate and potash producers, as facilities increase efficiencies and reuse water throughout the production process. The amount of water used to produce one ton of phosphate and potash fertilizer in 2016 has decreased by nearly 9 percent since 2013. 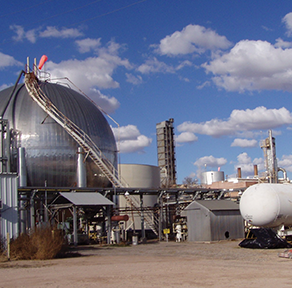 ANPI’s manufacturing facility in Benson, Ariz. produces nitric acid and both dry and liquid forms of ammonium nitrate, which supplies both the mining and agriculture industries.

The major feedstock to ANPI’s process is anhydrous ammonia, which is imported to the facility from various locations. The heating and cooling required in the processes are provided through steam and cooling water, with the approximate 650 gallons per minute of water being supplied from deep aquifers. In addition, the nitric acid production process also produces water as a byproduct. To execute on the zero-discharge program, ANPI employs two key methods. The first is the capture of all liquid waste product streams, which are reprocessed in a state-of-the-art, automated facility to provide a clean feedstock for salable products. This system has recently been upgraded using Swiss technology resulting in a high degree of automation.

The second method involves managing all blowdown streams from cooling towers and boiler systems. These are collected and then reprocessed through a brine concentrator, which provides two streams. The main stream from this process is a high-purity water stream that is used to produce the steam that is used in the ammonium nitrate production process. The second, and much smaller stream, is a slurry of concentrated reject materials that are collected and shipped to a landfill periodically.

You cannot produce fertilizer without using energy, either in the form of natural gas or other fuels, electricity, or steam. Fertilizer manufacturers cogenerate energy or use other low-impact energy sources, such as solar or steam from waste heat. Such steps contribute to sustainability goals by reducing the industry’s overall energy footprint. Energy efficiency improvements are generally undertaken when significant capital investment projects are undertaken, i.e., when facilities are upgraded or new facilities are built. 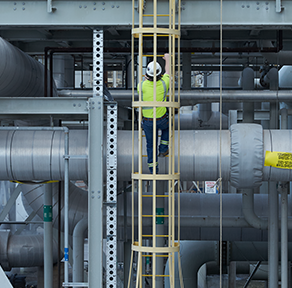 Mosaic continuously looks for opportunities to improve the efficiency of and expand the output of its cogeneration assets. The company’s Uncle Sam production facility in Louisiana took a step toward energy independence in 2016 when it began operation of a new turbine generator that will provide additional power for its operations.

With the addition of this new turbine generator, the Uncle Sam facility has enough cogeneration capacity to reduce its consumption of fossil fuel-based imported power to less than 5 percent of total plant electricity consumption. The new turbine generator allows Mosaic to reduce its energy use and greenhouse gas emissions impact by reducing the amount of fossil-fuel based power provided by the local grid. The project is expected to result in savings of more than 65,000 gigajoules of energy and 9,000 tonnes of CO2 annually.

Several system and operational improvements were designed into the installation to optimize steam production, usage, and condensate return.

“Not only did Mosaic’s addition of TG3 at our Uncle Sam facility make good business sense because it improves the facility’s efficiency and lowers our energy costs long-term — but it was a decision that was also good for the environment,” said Steve Davis, Mosaic’s Director of Energy Supply. “This investment and Mosaic’s broader efforts to power our operations with virtually GHG emissions-free cogenerated electricity demonstrate our ongoing commitment to environmental responsibility.”

Participating companies reported using 10 gigajoules (GJ) of energy per ton of fertilizer produced. This is a 6 percent decrease from 2015, reflecting energy efficiency improvements. During the fertilizer production process, heat is generated, captured, and used as thermal energy for heating and electricity generation.

In 2016, companies reported capturing 111.2 million GJ of waste heat. This is equivalent to 79 percent of the total energy use reported by all participating producers.

This is energy that manufacturers would otherwise have to purchase or supply by fuel combustion.

Fertilizer production can have a significant physical footprint, especially in the mining sector. However, every surface acre mined is reclaimed, restoring such lands for productive uses for both wildlife and people. While land reclamation data is primarily focused on mine reclamation, it is applicable to any fertilizer producer who has disturbed and/or reclaimed land around their facilities.

In 2016, companies reclaimed 6,641 acres of land. Visualize 106,256 tennis courts; that’s the amount of land members reported restoring to the environment.