The industry is working to do more with less. The production of commercial fertilizers requires a significant amount of natural resources, such as natural gas, water, and land. However, TFI member companies have invested billions of dollars in facility upgrades that have made the production process more efficient and sustainable.

The data reported in this report represent a substantially different set of participants than prior years; therefore, representation of trends would not be accurate. As the total number of companies that participate in this report changes, so does the quantity of reported natural resources used. For clarity, this report will focus on normalized numbers or the amount of resources needed to produce one ton of fertilizer.

Sustainable water use is a key element in the industry’s conservation efforts. Water is a significant resource in the production of phosphate and potash fertilizers, and to a lesser extent for nitrogen. TFI gathered water-related data based on volume (in gallons) of water purchased and water withdrawn from wells and surface water.

Among nitrogen producers, water usage on a per-ton basis has decreased each year since reporting began in 2013. The amount of water used to produce one ton of nitrogen fertilizer is down 7 percent from 2016 to 2017 and down 42 percent since 2013.

Water use on a per-ton basis increased slightly for phosphate producers, as facilities continue to increase efficiencies and reuse water throughout the production process. The amount of water used to produce one ton of phosphate fertilizer in 2017 has increased four percent since 2016.

Many fertilizer manufacturers have set water efficiency and zero-discharge goals for their operations. These goals are achieved through the use of recycled and reclaimed water. Recycled water refers to water demand an organization satisfies by reusing water during the production cycle instead of withdrawing additional water. Reclaimed water is wastewater used from third-party sources that offsets water that would otherwise be drawn from other sources. Members reported recycling 516 billion gallons of water within their operations in 2017. This is the same amount of water that 5,160,000 households use every year.5

ANPI’s manufacturing facility in Benson, Arizona, produces nitric acid and both dry and liquid forms of ammonium nitrate, which supplies both the mining and agriculture industries.

The major feedstock to ANPI’s process is anhydrous ammonia, which is imported to the facility from various locations. The heating and cooling required in the processes are provided through steam and cooling water, with the approximate 650 gallons per minute of water being supplied from deep aquifers. In addition, the nitric acid production process also produces water as a byproduct. To execute on the zero-discharge program, ANPI employs two key methods. The first is the capture of all liquid waste product streams, which are reprocessed in a state-of-the-art, automated facility to provide a clean feedstock for salable products. This system has recently been upgraded using Swiss technology, resulting in a high degree of automation.

The second method involves managing all blowdown streams from cooling towers and boiler systems. These are collected and then reprocessed through a brine concentrator, which provides two streams. The main stream from this process is a high-purity water stream that is used to produce the steam that is used in the ammonium nitrate production process. The second, and much smaller, stream is a slurry of concentrated reject materials that is collected and shipped to a landfill periodically. 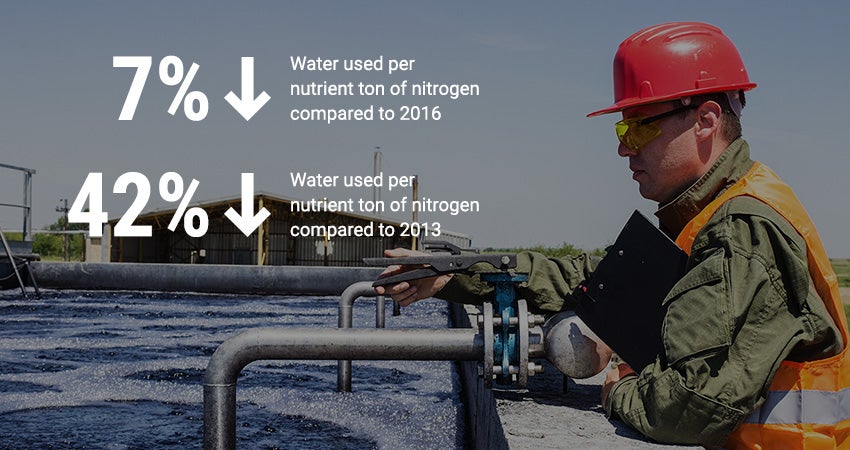 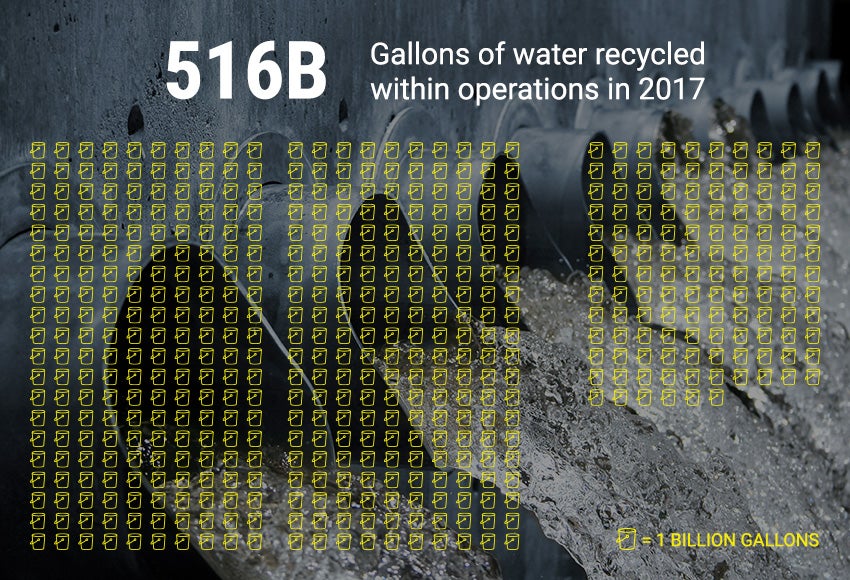 Minimizing greenhouse gas (GHG) emissions is a priority for companies in the fertilizer industry.

High purity carbon dioxide (CO2) is a byproduct of ammonia production, but it is also a necessary ingredient in the production of urea fertilizer; therefore, the industry captures CO2 emitted during ammonia production and re-uses it during the urea production process. Excess captured CO2 from fertilizer production is also recycled for other industrial use, such as enhanced oil recovery and the carbonization of soft drinks.

Graph of GHGs captured and re-used 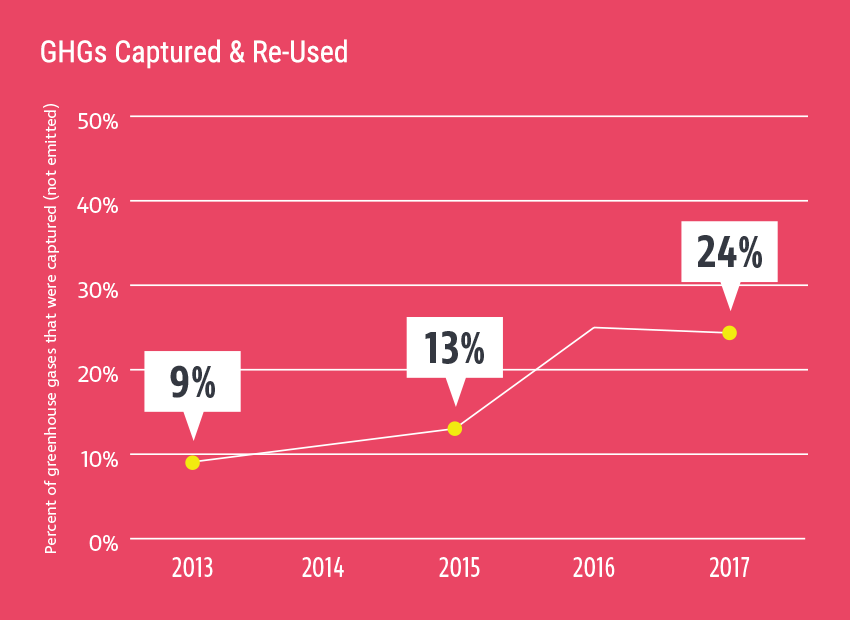 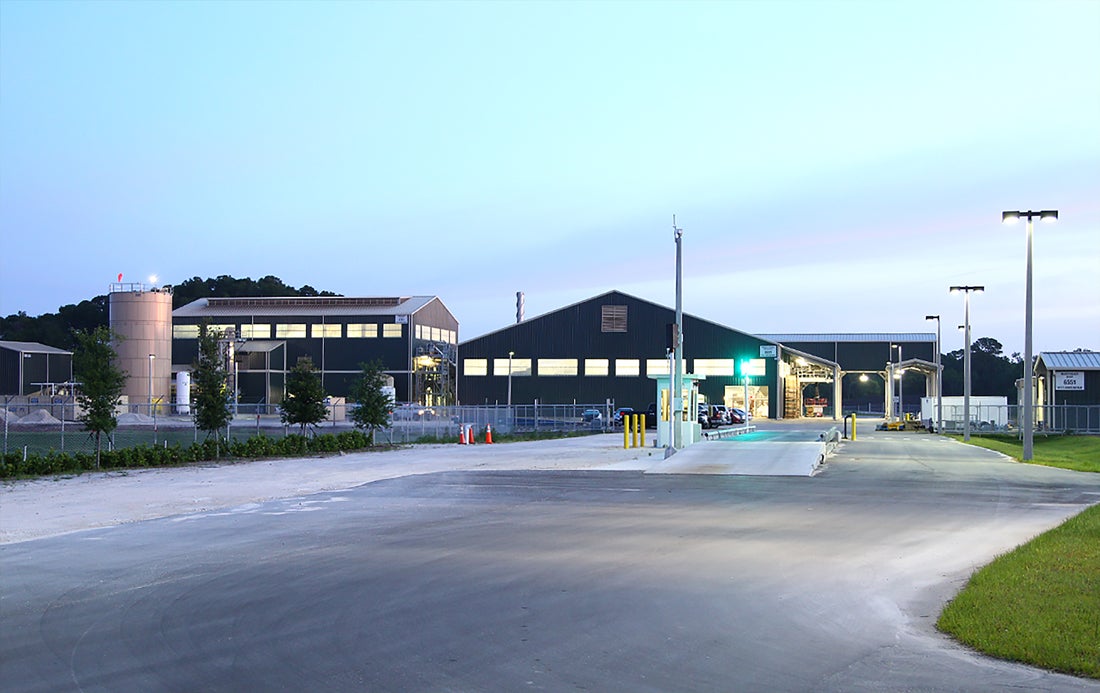 This technology represents an ideal circular economy addressing the three pillars of sustainability. Social: this technology is a new, clean, and efficient way to recycle organic waste, producing a pound of fertilizer from a pound of waste in a closed loop process. Environmental: nutrient loss is reduced, thereby protecting our watersheds. Net greenhouse gas emissions are reduced in the process and in application. Economic: these products contribute to efficient clean food production by putting value back into organic waste materials

The production of fertilizer requires energy, either in the form of natural gas or other fuels, electricity, or steam. As part of their sustainability efforts to reduce their energy footprint, fertilizer manufacturers cogenerate energy or use other low-impact energy sources, such as solar or steam from waste heat.

During the fertilizer production process, heat is generated, captured, and used as thermal energy for heating and electricity generation. In 2017, companies reported capturing 101.8 million GJ of waste heat. This is equivalent to 51 percent of the total energy use reported by all participating producers. From this waste heat, companies were able to generate 2.3 billion kilowatt hours of electricity from the capture and reuse of this waste heat. This is energy that manufacturers would otherwise have to purchase or supply by fuel combustion.

Fertilizer production is an energy-intensive operation. TFI partnered with the U.S. Environmental Protection Agency’s (EPA) ENERGY STAR program to develop tools that fertilizer manufacturers, particularly those that produce nitrogen fertilizers from ammonia, may use to improve the energy efficiency of their manufacturing operations. Specifically, to help member companies benchmark their operations, TFI worked with the EPA to develop the ENERGY STAR Plant Energy Performance Indicator (EPI). The EPI is an energy-management tool that enables companies to compare the energy performance of their plant to the performance of plants of peers across the industry. EPIs also help companies measure, track, and benchmark plant energy performance over time and against the industry. Such data are critical to determining potential process changes to further enhance energy efficiency and in setting energy improvement goals. 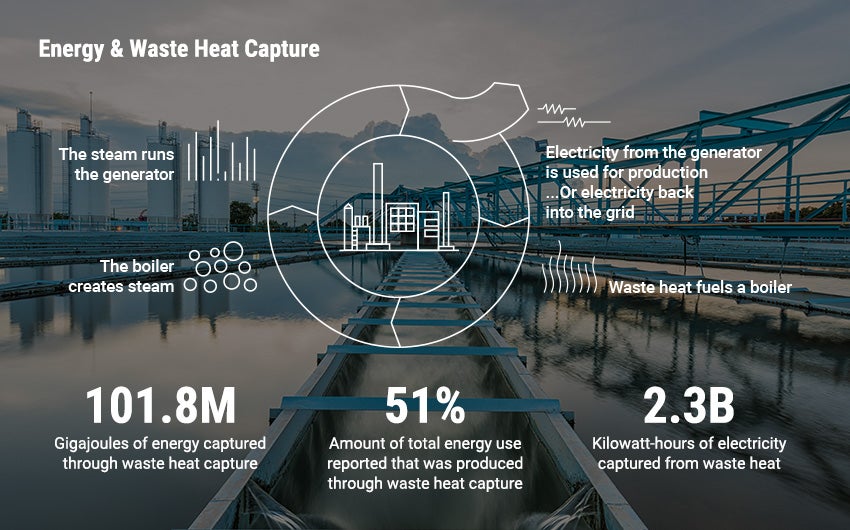 Fertilizer production can have a significant physical footprint, especially in the mining sector. However, surface-mined acres are reclaimed, restoring such lands for productive uses by both wildlife and people. While land-reclamation data are primarily focused on mine reclamation, the information is applicable to any fertilizer producer who has disturbed and/or reclaimed land around their facilities. Land reclamation associated with mining activities is not a steady activity year-to-year, but instead follows the mining cycle. It is not unexpected to see swings in the number of acres reclaimed from year to year as mine sites close or reclaimed acres are released. In 2017, companies reclaimed 2,895 acres of land. 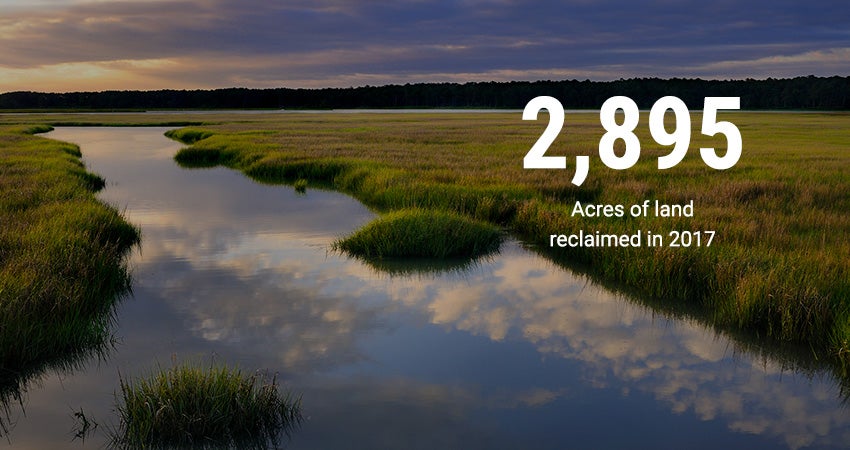 In Mosaic’s Florida phosphates operations, teams of biologists, ecologists, and engineers conduct acre-for-acre reclamation, returning mined lands to productive wildlife habitats and recreational, agricultural, commercial, or residential purposes. Here are some of the many ways Mosaic returns formerly mined land to productive use for wildlife and people:

More than 3,000 Mosaic employees call central Florida home, and the company takes great pride in reclaiming the land for future generations to enjoy.