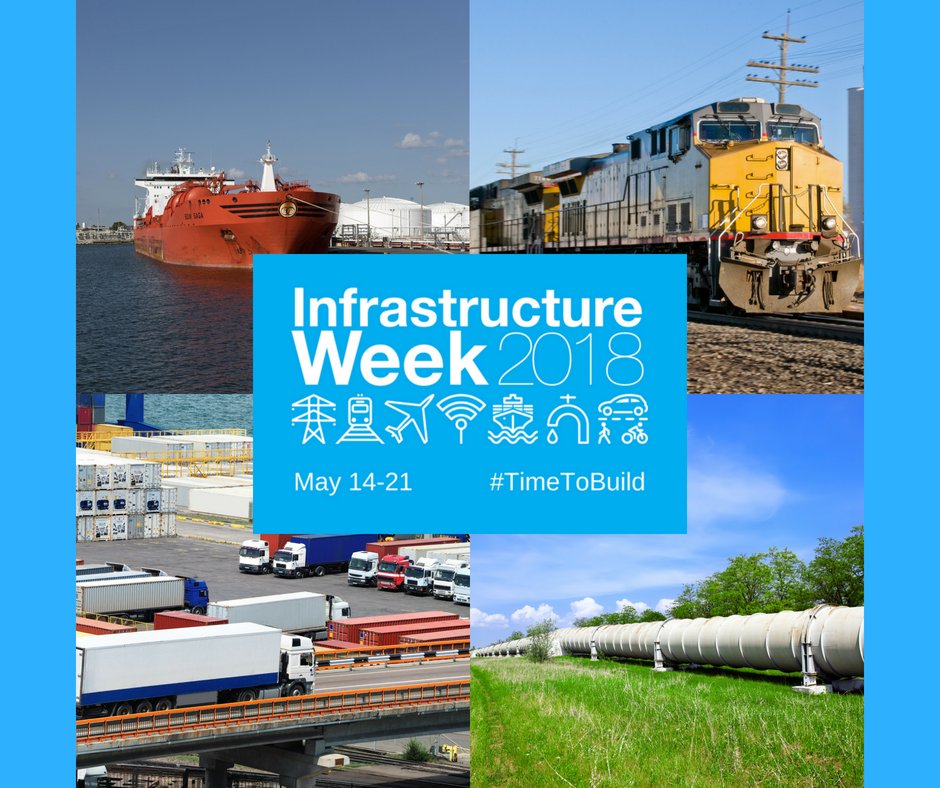 One fact that consistently surprises people is that fertilizer is on the move all year round. Year after year, more people learn that our industry supplies nutrients for crops that nourish a more prosperous world. No less than half of all food grown around the world today is made possible through the use of commercial fertilizer. To meet the growing demand for food, the fertilizer industry relies on many modes of transport, including rail, trucks, waterways, and pipelines, to get fertilizer to farmers when they need it. Of course, strong transportation infrastructure is about more than getting crop inputs, such as fertilizer, to farmers; it’s also about getting those crops out to rest of the country and to export markets.

This week, The Fertilizer Institute (TFI) commemorates National Infrastructure Week. During Infrastructure Week, TFI proudly joins with hundreds of organizations and thousands of leaders all united around one message: It's #TimeToBuild: Our Future. Our Infrastructure. At a time when far fewer resources are devoted to infrastructure than was the case in the past, TFI supports advocacy and education that elevates infrastructure as a critical issue impacting America's economy, society, security, and future.

What exactly is infrastructure? British Prime Minister Margaret Thatcher famously said, “You and I come by road or rail, but economists travel on infrastructure.” Her point? Actually, the term "infrastructure" doesn’t really speak to the general public. Although we rely on it every day, most of us rarely stop to think about it. In fact, the term means something slightly different to almost everyone. Neither Congress nor state legislatures have infrastructure committees, per se.  There is no federal infrastructure department or agency. Still, the fundamental importance is undeniable for these reasons:

1.    Investment in infrastructure significantly reduces the costs of trading goods.

Fertilizer Moves all Year Round

Within the United States, fertilizer moves 24–7, 365 days a year by rail, truck, barge, and pipeline. Due to fertilizer production facilities’ limited storage, the finished product must be transported to warehouses and terminals located strategically, like pieces on a chess board, throughout the nation. Each season, every day, the distribution system is key to getting fertilizer where it needs to be so that the right amount of the right fertilizer product is safely delivered when the farmer needs it.

Have you seen the latest State of the Fertilizer Industry (SOI) Report? (See what we found out.) Several trends emerged as TFI members’ voluntary reporting underscored the importance of the country’s strong transportation network. The SOI Report represents the entire fertilizer value chain and accounts for 94 percent of nitrogen, phosphorus, and potassium production capacity and 33 percent of the retail sector in the United States.

Have you ever wondered what keeps the TFI team up at night? Without a doubt, it’s transportation service disruptions. (Well, that and thinking of ways to drive greater adoption of 4R Nutrient Stewardship.) The truth is, it’s hard to overstate the importance of our nation’s transportation infrastructure to agriculture and rural America’s comparative advantage in world markets. The future of the fertilizer industry depends on our ability to provide goods and services that help growers feed the world, while keeping the industry’s colleagues, consumers, and communities safe.