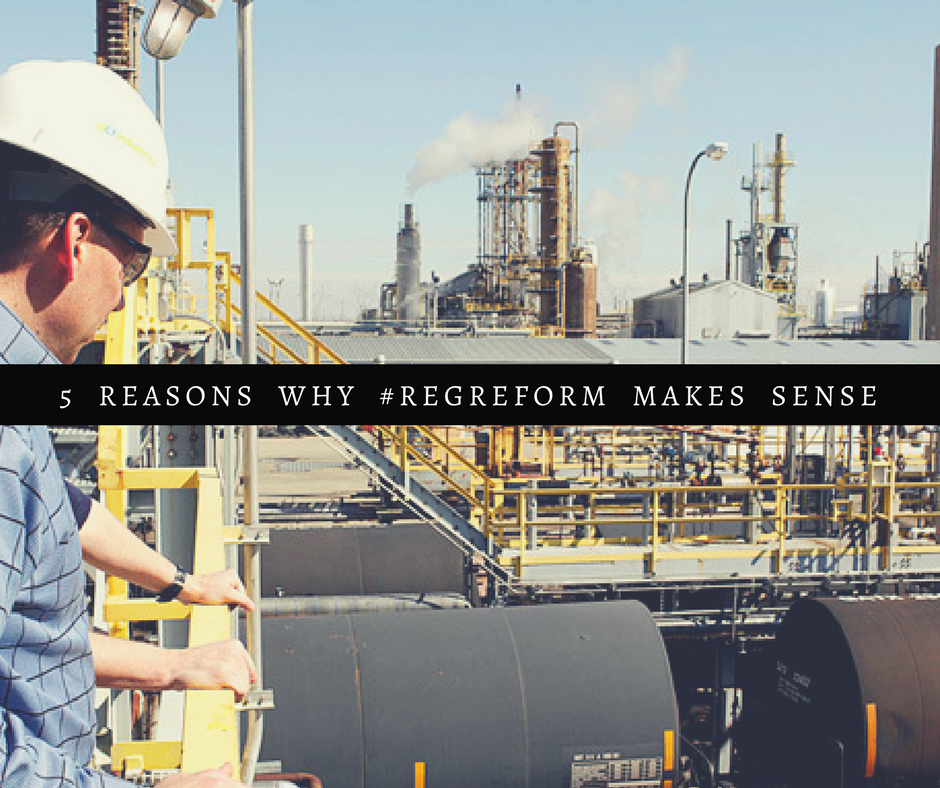 Since President Trump’s Inauguration on January 20, 2017, regulatory reform has been the talk of the town inside the D.C. beltway. The gulf between those on opposite sides of the issue is pretty wide, but TFI believes reform is necessary to improve efficiencies of both government and business without compromising environmental protections, health, safety and security, and other regulations. Here are TFI’s top 5 reason why we believe regulatory reform makes sense:

The process for obtaining federal permits for new and/or expanded manufacturing or mining operations is extremely complicated, multi-layered, time consuming, and expensive. The amount of time required to obtain a federal permit may vary from six months to 10 years (!) depending on the agency, which is far too long for companies to wait when making multi-billion dollar investment decisions impacting thousands of jobs.

For example, federal air permit regulations require fertilizer manufacturers to complete dispersion modeling to a high degree of accuracy against ambient standards, but, the emission factors provided by EPA (dust from roadway traffic) are highly imprecise. This results in the need for controls, such as sweeping and watering of paved roadways, to reduce particulate matter emissions. An alternative method of evaluating emission contributions to ambient air from roadways is necessary to allow job-creating projects to move forward in the permitting process.

As an example, a TFI member obtained a Prevention of Significant Deterioration (PSD) air permit that took more than two years to obtain and cost more than $225,000 to hire consultants, conduct modeling, and pay application/agency filing fees.

The example illustrates the impact this type of permitting process may have on the competitiveness of U.S. manufacturing. Companies ready to compete with U.S. manufacturers of ammonia in countries like China are able to permit facilities much faster and at a fraction of the cost when compared to the experience in the United States. TFI recommends that the Department of Commerce (DOC) contemplate the creation of a multi-constituency commission tasked with identifying the needed changes that may be made to the federal clean air permitting process in the next 12 months.

Many regulations require onerous, frequent, and duplicative recordkeeping and reporting requirements that are of limited value to the federal government. In general, TFI recommends that these requirements be streamlined by aligning reporting frequencies and having a common set of definitions for compliance periods. Tracking compliance for the myriad of regulatory reporting periods frequently causes confusion and requires significant management resources for no additional benefit.

For example, the Environmental Protection Agency (EPA) requires our industry to perform periodic assessments and report on the maximum achievable control technology for natural gas-fired sources, i.e., boilers. The rule, Mandatory Reporting of Greenhouse Gas (GHG) Rule; however, does not prescribe any GHG emission limits or reduction requirements. On average, fertilizer manufactures spend $10,000-$15,000 per reporting period to comply with this regulation that is not tied to any environmental benefit. We believe these reporting requirements should be repealed, or at the very least, amended to allow for streamlined reporting using GHG estimates based on historical data.

Safety and security is a top priority for the fertilizer industry, and we strive to be in full compliance with government regulations that keep our employees, communities, and facilities safe. However, there are at least three federal agencies that administer programs to enhance safety and security at facilities that handle chemicals. These programs have separate recordkeeping and reporting obligations and three separate teams of federal agency officials administering and enforcing these program requirements. This is not only inefficient, but also it is not an effective use of government time and resources when one agency could manage a single program.

The three programs (Department of Homeland Security’s Chemical Facility Anti-terrorism Standards program, the Occupational Safety and Health Administration’s Process Safety Management program, and EPA’s Risk Management Program) each require separate reporting of anhydrous ammonia. TFI believes these programs should be consolidated into one program that would create efficiencies for the federal government and the fertilizer industry. Additionally, the fertilizer industry already supports the ResponsibleAg initiative, which provides audits for thousands of facilities that handle chemicals to ensure they are in compliance. The government might look at turning to this program to ensure facilities are following the regulations.

The major U.S. environmental laws are written with the understanding that state environmental agencies will be the primary implementer and enforcer of national environmental laws. This precedent was set on the valid assumption that state officials are more knowledgeable about their geographic boundaries and that not every state is challenged in the same way. However, over the past 20 years, large EPA regional offices have been created with functions that often duplicate the efforts of states to implement environmental laws, which undermines what Congress envisioned. This creates two regulatory channels the fertilizer industry must monitor.

For example, when a fertilizer company intends to start a new mining operation, permits must be acquired. Under the current construct, they must receive approval from EPA and the state environmental agency charged with enforcing EPA policy. In the year 2000, the fertilizer industry could have expected a typical mining permit process to take roughly three years at a cost of $3 million. Today, because of the duplicative nature of the process, the industry can expect it to take 10 years and cost $30 million, which does not include costs associated with lost production time.

Once a federal rule has been developed, states should be left to implement and enforce. EPA’s role should be advisory and limited to addressing technical questions on the specifics of a federal standard.

As noted above, the major environmental laws were written with specific intentions. Laws, however, were never intended to address every fine point of a federal program. Implementing agencies are given discretion to interpret laws to meet the Congressional intent. Recently, however, EPA has undertaken efforts in rulemaking that go beyond what the underlying environmental law intended.

When Congress enacted the Clean Water Act in 1972 to protect navigable waters, it included a definition of “navigable” rivers, lakes, streams, coastal areas, and wetlands. In the years since, EPA and the U.S. Army Corps of Engineers have greatly expanded the original focus to also regulate an ever widening class of waters. The Waters of the United States (WOTUS) rule was an attempt to define “navigable” waters; however, the definition overly expanded EPA’s jurisdiction beyond the Clean Water Act’s intent. The rule now includes ditches, streams, and other waters on farms potentially enabling EPA to regulate farmers’ land use, including fertilizer application.

The WOTUS rule was crafted with little substantive input from the states and industries that would be obliged to implement them. TFI recommends the rule be repealed and replaced with a definition limited to those waters that truly meet the legislative definition of “navigable” waters.

Fertilizer provides the nutrients that nourish the nation’s crops, helping to ensure a stable and reliable food supply that is of critical importance to our national security. The industry, including manufacturers, wholesalers, and retailers, is committed to providing these nutrients to farmers when and where they need them. When the industry needs to work in regulatory environment that impedes their ability to serve farmers, neither agriculture nor the nation are served in their best interests.

The Fertilizer Institute welcomes the Trump Administration’s desire to promote manufacturing in the United States by addressing regulatory burdens. We responded to the Department of Commerce’s request for information and comments on the impact of federal regulation on domestic manufacturing. Below are our top 10 regulations we’d like to see either repealed or improved.